You have no items in your shopping cart.

Product was successfully added to your shopping cart.

The process begins with the highest quality organic raw cacao beans and cold pressing them to make a dark brown paste called chocolate liquor. The paste or often called liquor is cold pressed at 112 degrees F (sometimes even lower) to separate out its fat (cacoa butter). What remains is a "cake" (also known as cocoa solids) this part is then cold milled to become organic, truly raw unsweetened cocoa powder.

This has the highest level of cocoa flavonols because it's the least processed. Also, because the fat has been removed and it contains no extra ingredients such as sugar, it's the healthiest form of chocolate you can ever find.

Of much greater interest in the context of health benefits is the rich flavonoid content of raw cocoa and the relatively rich flavonoid content of some chocolates and cocoas. Flavonoids are part of a large and diverse class of phyto-chemicals called polyphenols. Several thousand flavonoids exist in substantial amounts in common plant-based foods, such as tea, chocolate, cocoa, soybeans and wine. Epidemiological research, which studies the association between diet and health, in the last decade has suggested that some flavonoids might protect against certain chronic diseases, especially cardiovascular disease.

Other Fun Facts!
Chocolate's antioxidant potency roughly matches that of gallic acid, another potent antioxidant, and is even more effective at cutting oxidation of (LDLs) than those in red wine (consumption of which has been found to reduce significantly an individual's risk of heart attack).

Cocoa and chocolate have been shown to reduce the demineralization process-an activity which directly results in the formation of dental caries. In a study conducted at the Eastman Dental Center in Rochester, New York. The researchers reported that: "Chocolate has a high content of protein, calcium, phosphate and other minerals, all of which have exhibited protective effects on tooth enamel.

Chocolate contains copper (.8mg per 100g) which enhances red blood cells' ability to carry oxygen. The average woman is deficient in copper. A good source of copper is liver but wouldn't you rather eat chocolate?

PEA(Phenylethylamine) is followed closely by theobroma as the chocolate chemical most responsible for lifting depressions. It is one of a group of plant-based stimulants called methylxanthines whose best know member is caffeine. Chocolate has straight caffeine , too, but in very small amounts (70mg/100g). The effects of theobroma are similar to, but milder than caffeine's, and include alertness and decreased fatigue.

Chocolate's high level of magnesium (131mg per 100 g) is also credited for adding to the euphoria one gets from eating chocolate. Magnesium levels are found to be low during menstruation.

What can I do with raw organic cacao powder?

- Use it in place of carob, cacao nibs, or mesquite!
- Make chocolate candies and bars.
- Create creamy chocolate ice cream.
- Sprinkle it on top of your salad.
- Mix it with raw cocoa butter and dip berries in it.
- Combine it with raw agave nectar or honey for chocolate syrup.
- Coat your soaked nuts and seeds with it and dehydrate till crisp.
- Make chocolate pudding by blending the powder with avocado.
- Mix it with your nut butters for delicious fudge.
- Add it to your super foods (goji, maca, etc.) for an extra nutrient boost.
- And much more!

Prop 65 Information: This ingredient is part of the state of California's Proposition 65 Warning. Please click HERE for more information. 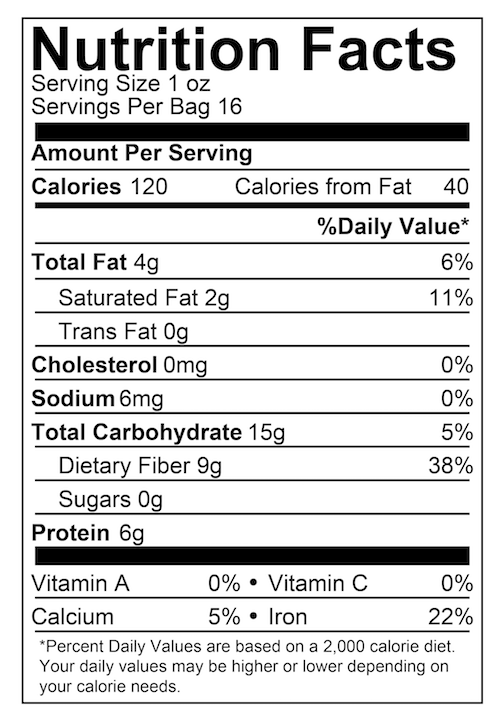 x
Price:
Actual Price:
Our price is lower than the manufacturer's "minimum advertised price." As a result, we cannot show you the price in catalog or the product page.

You have no obligation to purchase the product once you know the price. You can simply remove the item from your cart.
Our price is lower than the manufacturer's "minimum advertised price." As a result, we cannot show you the price in catalog or the product page.

You have no obligation to purchase the product once you know the price. You can simply remove the item from your cart.
My Wishlist (0)

You have no items in your wishlist.